Held annually each June, Pride Month celebrates the equality and visibility of the lesbian, gay, bisexual, transgender, and queer community. This month-long celebration brings together millions of people all over the world as they take part in parades, parties, readings, educational seminars, and street festivals. Events of all kinds are held globally, inviting individuals of all walks of life to empower, support, educate, and bolster the rights of LGBTQ+ people.

Representative of Pride is the vibrant rainbow flag, a powerful symbol that its creator, Gilbert Baker, saw as a way to express visibility and truth. The original design featured eight distinctive stripes of varying colors, each of which reflected a specific meaning: hot pink for sex, red for life, orange for healing, yellow for sunlight, green for nature, turquoise for magic, blue for serenity, and purple for spirit.

Over the years, the design evolved, largely because of an inability to find certain fabric colors. The hot pink shade was the first to go, followed by turquoise. Today, the popular six-stripe variety is spotted at Pride events the world over — and not just on flagpoles. The color scheme adorns shop windows, clothing, accessories, and so much more. Is it any wonder it has also inspired beautiful flower arrangements?

They look stunning, sure, but there’s more to these bouquets than meets the eye. They’re celebratory in the most meaningful way. They brighten up any space and send a message, reflecting the rich diversity of the community and expressing unity for the LGBTQ+ rights movement. As a renowned international symbol, the flag is immediately recognizable as a symbol of positivity, hope, and, yes, pride. Here are a few radiant stems to add to your Pride festivities this year.

Show Your Love in Red A rich red has long been associated with feelings of passion, intensity, and true love. The quintessential red rose is a Valentine’s Day favorite and is often given to significant others on birthdays and anniversaries. It’s a rich, true, and devoted color — the type of tone that drips with style and character.

Love Expressions captures those sentiments perfectly. The arrangement brims with lush red roses. The classic flowers are beautifully contrasted by eye-catching fuchsia dianthus, which happens to be known as the “flower of the gods.” It’s reflective of passion, gratitude, and love, all of which are fittingly associated with Pride.

Set the Tone in Orange 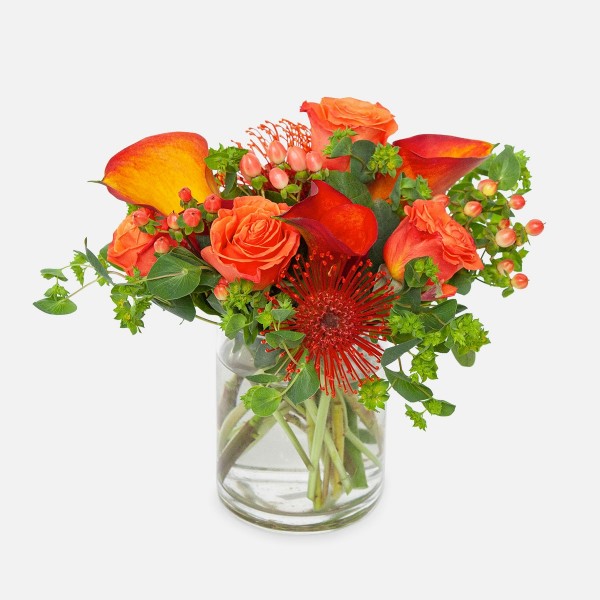 Bright and fearless, orange stands front and center in any environment. There’s no denying the passion of the color — but orange is more feisty than its deeply intense red sister. Orange is fresh, juicy, and fun. It’s a multifaceted kind of color that represents the spirit and diversity of Pride beautifully.

That’s precisely what makes Orange Blaze such an apt addition to Pride month. Comprised of roses and calla lilies, it brings a pop to a centerpiece, a windowsill, or a desktop — so you can show your pride no matter where you might be and what you might be doing.

Make It a Sunshine Day 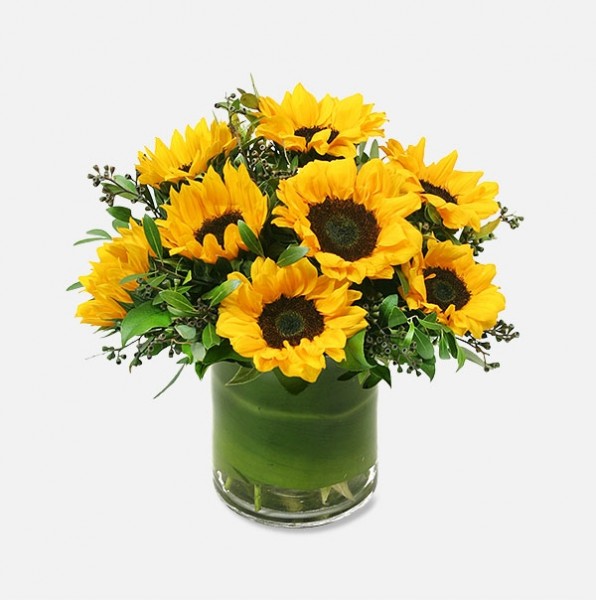 What’s one trait that’s undeniable about rainbows? They’re guaranteed to make you smile! It’s fitting to choose a flower arrangement that also makes you beam, like Sun Shower. Bright is one way to describe this beauty. Brimming with an abundance of sunflowers, it’s sure to make any day warmer, sunnier, and happier.

Yellow alone is symbolic of so much that’s meaningful and heartfelt. It’s traditionally associated with friendship and togetherness, along with happiness, pride, joy, and success. It’s immediately uplifting and radiant, lending any space a certain cheerfulness that’s unavoidable even in a dim room. You can also send yellow flowers to friends celebrating Pride to liven up their day or to show how thankful you are to have them in your life. At its core, Pride is joy. It reflects a sense of optimism for the future. After all, Pride itself was a protest before it was ever a celebration. It was 1969 when the police raided the Stonewall Inn, a haven for the LGBT community, in Greenwich Village. The raid spurred a six-day protest over the treatment of the bar’s patrons and, on a much larger scale, members of the queer community — and it was the catalyst for the global gay rights movement.

The uprising sparked change, and today Pride continues to elevate awareness and promote equality. Green taps into that energetic spirit and drive for change, and its natural hue is a welcoming addition to any celebration. Fantasy Cymbidium Orchids are not only captivating in their beauty but also incredibly robust in their varied greens. The lighter shade contrasts beautifully with the darker tone, while the artful composition looks dramatic and sophisticated in its rectangular vase.

It’s OK to Be Blue 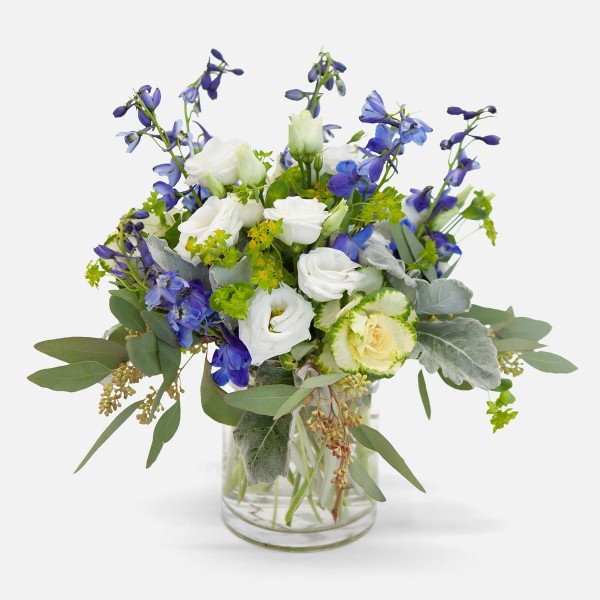 Being blue is a good thing when it’s reflective of peace and tranquility. The color has the innate ability to inspire feelings of serenity, making it a wonderful choice for your Pride celebrations, or simply to show your support. It’s lovely for a bedroom in particular since blue symbolizes calm and thoughtfulness.

The Blue Diamonds arrangement is fitting for that reason. Composed of delphiniums and lisianthus, it captures the spirit of Pride with its lively appearance. Yet it also expresses a sense of understated style, making it just right if you prefer something colorful but not over the top.

Pink Is Always in Style 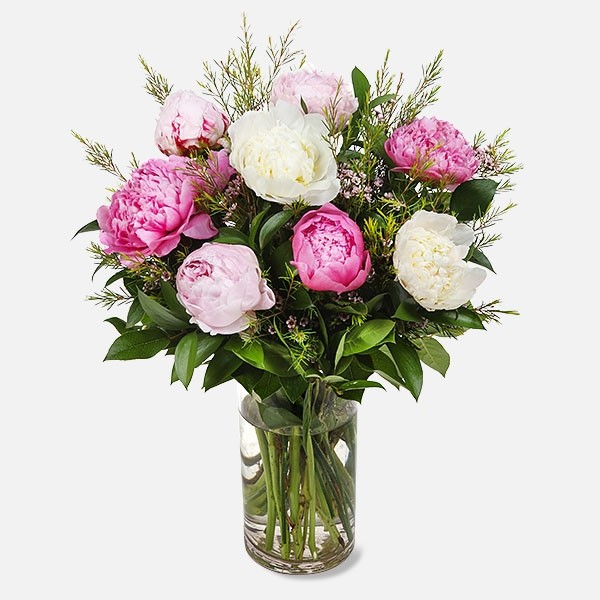 While pink may ultimately have been removed from the rainbow flag, it’s still more than a suitable option for celebrating Pride. In fact, it’s one of the best colors of all for the pure joy that it brings to any space. Pink is symbolic of love, gentleness, romance, and happiness. It’s downright charming.

And that’s precisely why Charming Peonies is such an apt choice if you’re looking for a sweet way to recognize Pride in June. It brims with a combination of soft and bright pinks, each contributing its own special touch to the arrangement.

Bring the Rainbow Inside When you want to incorporate multiple colors of the rainbow, a vibrant rose bouquet composed of different hues is the best choice. The Multicolor Rose Garden brims with personality, featuring an abundance of uplifting, cheerful, dramatic, light, and rich stems that tap into different meanings and feelings.

Recognizing Pride with flowers is about so much more than decorating your home. It’s ultimately a way to show support for protests over violence and discrimination and to promote equality, dignity, and awareness.