5 Plants That Clean the Air in Your Apartment

Plants are everything. They’re gorgeous. They invite a touch of the outside indoors. They brim with character. They add charm to drab spaces and have the potential to brighten moods and lift spirits. The fact that they also happen to purify the air should come as no surprise. Talk about overachievers!

Yep, plants are surprisingly adept at pulling harmful contaminants from the air that you breathe inside your apartment. Think about the countless culprits responsible for polluting your living space, from cleaning products to carpeting to furnishings. Everything has the potential to leave a little trace of something unwelcome behind, and anything you can do to counter those effects can have a positive impact on your comfort and peace of mind. If you want to take advantage of this super plant power, here are a few to consider adding to your apartment.

Begone, toxins! English ivy is one of those carefree plants that seem to grow every which way in outdoor settings. Because of its tendency to “creep” into spaces, it adds particular beauty to areas of the apartment that could benefit from a little color and earthy beauty. Give it enough light and moisture and you can trust it to absorb those unwanted contaminants, such as toluene, formaldehyde, benzene, and xylene, from your indoor air. Some studies find that it may even minimize mold spores.

You may know it by its more diabolic name, devil’s ivy. But there’s nothing evil about the lush golden pothos plant. It’s a great option for those who aren’t exactly natural-born gardeners — you’d have to go out of your way to harm this beauty. With its long vines and heart-shaped leaves, it exudes an eye-catching character from every angle. It also happens to be a top-rated air purifier, efficiently removing such toxins as toluene, formaldehyde, and benzene. If you’re a pet parent, make sure to hang it in a space where your fur babies can’t reach them. 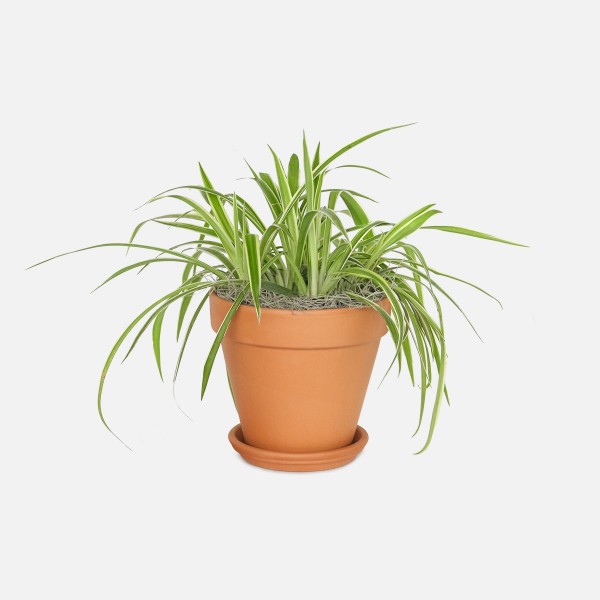 Why does everyone love the spider plant? Well, it’s probably mostly due to the fact that it’s really easy to keep alive. You don’t need a green thumb to raise one of these beauties! But it’s also considered one of the most effective air-purifying plants out there. It’s ideal for combatting formaldehyde, benzene, xylene, and carbon monoxide, among other contaminants. (Note: You still need to keep CO detectors in your house!) It also happens to be non-toxic, so it’s safe for apartments with kids and pets.

There are many different varieties of dracaena, all of which share ornamental beauty in common. Leaves are lean and can be glossy and spiky, making the plant a sure focal point of any part of your apartment. More than just aesthetically pleasing, the plant is also cherished for its air-purifying properties. It can efficiently remove benzene, formaldehyde, trichloroethylene, and carbon dioxide. Another bonus? They’re lively and have the potential to grow several feet tall. You’ll love the way they bring your apartment to life!

Stale air has nothing on the magnificent orchid. It’s the ultimate addition to any apartment, especially if you know your way around plants. Sure, they need some extra TLC, but they are well worth the effort. You’ll be rewarded with pretty blossoms, eye-catching elegance, and absorption of xylene. More than that, they’re among the few plants that release oxygen at night. So if you want to brighten up a bedroom in your apartment and clear the air, there’s no better way than to introduce an orchid or two. Adding a houseplant to your apartment is like renewing your commitment to healthy living. Greenery has the added benefit of introducing positivity and color into your living space. Why not take advantage of its air-purifying abilities at the same time?